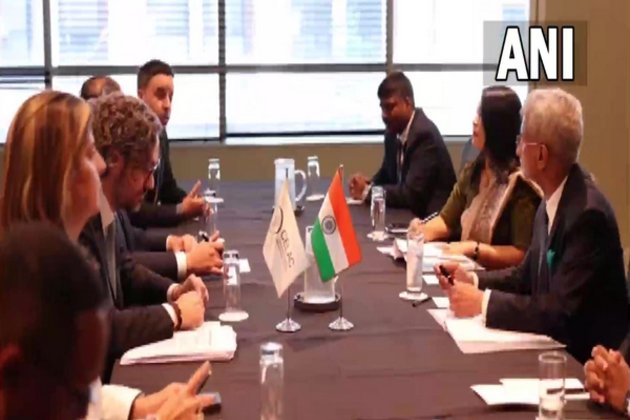 By Reena BhardwajNew York [US], September 19 (ANI): External Affairs Minister S Jaishankar on Monday participated in the India-CELAC (Community of Latin American and the Caribbean States) Quartet Meeting held on the sidelines of the United Nations General Assembly (UNGA) in New York.

Both sides expressed satisfaction at revitalizing the India-CELAC forum after a gap of 5 years. They expressed happiness at the growing engagements with Latin American countries, and reviewed the entire spectrum of India-CELAC relations.

They also emphasised the importance of enhanced cooperation in ST, IT and Space.

Both sides also acknowledged their cooperation in the UN and other multilateral bodies and agreed to work together on global issues like UN reforms and climate change.

Jaishankar highlighted the importance of digital literacy and reducing the digital divide. He proposed to the CELAC Quartet to conduct a workshop in India, where companies driving digital transformation can interact and learn from each other.

The theme of the 77th UNGA is "A Watershed Moment: Transformative Solutions to Interlocking Challenges".

Security Council reforms will be the top item on Jaishankar's agenda as he meets dozens of world leaders during the week packed with the Assembly session and several events on the sidelines.

Council reform is expected to get a boost during the session as US President Joe Biden is to present ideas for its reform and consult with other leaders, according to US Permanent Representative Linda Thomas-Greenburgh.

The former diplomat is also scheduled to host a meeting of the Foreign Ministers of G4, the group made up of India, Brazil, Germany and Japan that advocate for expanding the Council and mutually support each other's claim for a permanent seat.

During his 11-day visit to the US, Jaishankar is scheduled to have more than 50 official engagements including bilateral, plurilateral and multilateral meetings.

Jaishankar will also participate in meetings of Quad made up of India, Australia, Japan and the US, BRICS and several other key groupings.

In keeping with India's strong commitment to reformed multilateralism, Jaishankar will be hosting a Ministerial meeting of the G4 (India, Brazil, Japan, Germany), as well as participating at the High-Level Meeting of the L.69 Group on "Reinvigorating Multilateralism and Achieving Comprehensive Reform of the UN Security Council", the MEA statement read.

On September 24, the External Affairs Minister would be addressing a special event "India@75: Showcasing India UN Partnership in Action" to commemorate and showcase Azadi Ka Amrit Mahotsav, which would highlight India's development journey and its contributions to South-South Cooperation.

The event is expected to be addressed by the President of the 77th UNGA, along with Foreign Ministers of several member states, and the UNDP Administrator. (ANI)