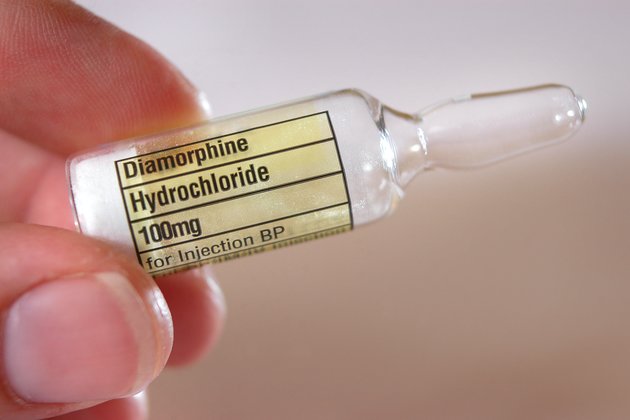 The UK has experienced many shortages of essential medicines, especially since the beginning of the pandemic. The latest shortage is of diamorphine, a painkiller that can be prescribed to drug users who have not responded well to other treatments.

While only around 200 people in England are prescribed diamorphine as a treatment for drug addiction, these shortages could have dire consequences for those who rely on it to help them live a normal life, hold down jobs and be part of society.

Diamorphine is also used as a painkiller in surgery and even for severe cancer pain. As a result, these current shortages might affect thousands of people in the UK.

The shortage also highlights a greater issue affecting people in both the UK and around the world when it comes to being able to access essential medicines.

While diamorphine (laboratory-made heroin) is used as a painkiller, Britain was the first country in the world to prescribe it to street-heroin users as a treatment for opioid dependency. In most countries, the medicinal use of diamorphine is banned because of the risks and potential for misuse. It is illegal to use or sell in the US.

While most users of street heroin will be offered oral methadone or buprenorphine as substitutes, diamorphine is offered when these substitutes are ineffective. UK-based schemes that help drug users access products such as diamorphine have seen drug-related crimes and deaths fall. But for the small number of diamorphine users in the UK, when this treatment isn't available it could lead to relapse, putting them at risk of harm if they turn to street heroin.

This isn't the first time there have been shortages of diamorphine in the UK. In 2021, supply shortages meant some NHS trusts had to purchase more expensive pre-filled vials of the drug for patients. This is one reason why morphine is now recommended for pain relief, as it's cheaper and there's greater supply. However, morphine is not authorised for use in drug addiction.

Diamorphine shortages worsened in March 2022. The main reason for this is because of England's reliance on two main suppliers - Wockhardt and Accord Healthcare, generic drug manufacturers who both have bases in India - who are experiencing stock issues. In fact, this product has had intermittent availability issues as far back as 2004 that have not been resolved. Manufacturing problems were cited as causing some of these issues.

In January 2022, 5mg and 10mg vials were reported as unavailable, with concerns that demand for other dosages (such as 30mg vials) would cause further shortages. This is now the case, with diamorphine injections in varying strengths out of stock in England.

Northern Ireland has also reported supply shortages. But Scotland has not reported any shortages - probably because they get their supply from a source in Switzerland, which is also used by one clinic in England. Wales has also not experienced supply disruptions, as diamorphine use is extremely limited, and other drugs are prescribed for recovering heroin addicts.

The supply shortages mostly affect people who use single-use diamorphine vials at home - including former heroin users and palliative-care patients.

Alternative drugs are available for most patients, such as morphine in cancer care. GPs and healthcare workers are being advised to encourage patients to use other drugs that have more stable supply. But for recovering heroin users who haven't found success with methadone or buprenorphine, diamorphine may be their only option. This is why decisions about changing treatments need to be made with patients, instead of for them.

Hospitals, hospices and palliative-care teams have already stopped using diamorphine, and newly referred street heroin users are instead prescribed a different treatment to help them. This means that shortages are likely only to be a significant problem for people already prescribed diamorphine.

It's not clear how the current shortages can be reduced or if other companies may wish to manufacture this product for the UK market. But to lessen its impact, and avoid a situation like this in the future, the following actions should be considered:

Switch to alternatives. A recent study asserts that other products can be successful in helping patients with opioid dependency. But again, if a patient is already taking diamorphine, they will need to be carefully consulted over decisions to change their treatment.

Responsible prescribing. This means not prescribing opioids, such as diamorphine, unnecessarily (such as for chronic pain) as there's a risk of becoming addicted.

Reduce over-reliance on a few sources. The UK depends largely on India and China for the supply of many drugs - not just diamorphine. Developing manufacturing capacity within the UK or sourcing from other countries should make medicines more accessible.

While diamorphine shortages may only affect a small segment of the UK's population, it highlights the wider medication supply shortage that the UK has been experiencing for years - which has only been worsened as a result of Brexit and the pandemic. The war in Ukraine may only further contribute to drug shortages. This is why the UK government needs to find alternative ways of supplying essential medicines to the population and further invest in UK manufacturing capacity to ensure this doesn't happen - or at least happens less often.