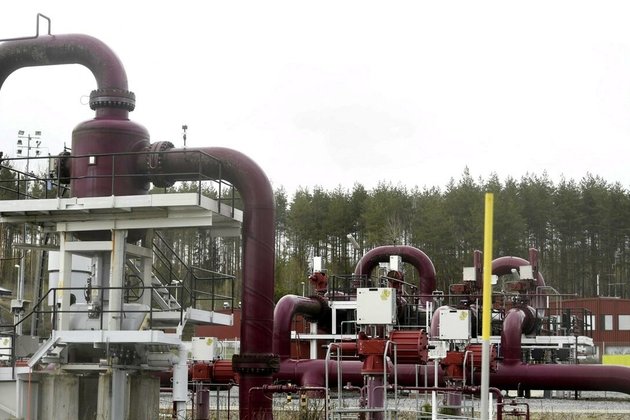 Russian energy giant Gazprom said Saturday it had halted gas exports to neighbouring Finland as it had not received payment in rubles. After Russia moved troops into Ukraine on February 24, Moscow asked clients from "unfriendly countries" - including EU member states - to pay for gas in rubles, a way to sidestep Western financial sanctions. Follow FRANCE 24's live blog for all the latest developments. All times are Paris time (GMT+2).

10:06am: Zelensky says only 'diplomacy' can end Ukraine war

The Ukraine war can only be resolved through "diplomacy", Ukrainian President Volodymyr Zelensky said Saturday amid a deadlock in negotiations between Kyiv and Moscow.

Russia on Saturday halted providing natural gas to neighbouring Finland, which has angered Moscow by applying for NATO membership, after the Nordic country refused to pay supplier Gazprom in rubles.

Natural gas accounts for about eight percent of Finland's energy consumption and most of it comes from Russia.

Follwing Russia's February 24 invasion of Ukraine, Moscow has asked clients from "unfriendly countries" - including EU member states - pay for gas in rubles, a way to sidestep Western financial sanctions against its central bank.

Finnish state-owned energy company Gasum said it would make up for the shortfall from other sources through the Balticconnector pipeline, which connects Finland to Estonia, and assured that filling stations would run normally.

"Natural gas supplies to Finland under Gasum's supply contract have been cut off," the company said in a statement.

Gasum said Friday that it had been informed by Gazprom Export, the exporting arm of Russian gas giant Gazprom, that the supply would stop on Saturday morning.

Wimbledon had its ranking points stripped by the ATP and WTA Tours on Friday over its decision to exclude players from Russia and Belarus at this year's championships due to Moscow's invasion of Ukraine.

Tennis's governing bodies have banned Russia and Belarus from international team competitions following the invasion, which Moscow calls a "special operation", but allowed players from the two countries to continue competing as neutrals.

The move by the men's and women's tours to strip Wimbledon of its ranking points will effectively reduce the world's most famous tennis tournament to an exhibition event.

"The ability for players of any nationality to enter tournaments based on merit, and without discrimination, is fundamental to our Tour," the ATP said in a statement.

"The decision by Wimbledon to ban Russian and Belarusian players from competing in the UK this summer undermines this principle and the integrity of the ATP Ranking system. It is also inconsistent with our Rankings agreement.

Russia's defence chief says the country's forces have taken full control of the massive steel plant in Mariupol that was the last stronghold of Ukrainian resistance in the city.

That would mark the end of a nearly three-month siege that reduced much of Ukraine's vital Black Sea port of Mariupol to ruins and left over 20,000 people there feared dead.

Russian Defence Minister Sergei Shoigu reported to Russian President Vladimir Putin on Friday that the Azovstal steelworks in Mariupol has been "completely liberated" from Ukrainian fighters.