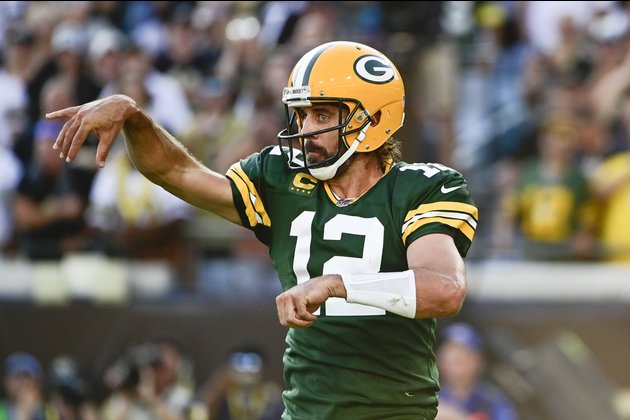 "I'm not going to make it bigger than it was. I'll let you guys (in the media) and the outside world do that," he said. "We've won a lot of games around here. We've lost a few, but you move on. Doesn't matter if you play incredible and put up 50 or get blown out. You move on to the next opponent. ... If we're starting to freak out after one week, we're in big trouble."

The next opponent is the Detroit Lions, who visit Lambeau Field coming off their own Week 1 loss.

The action has been more split at DraftKings, where the Packers are 12-point favorites. While Green Bay is backed by 55 percent of the money at the sportsbook, Detroit has been supported by 53 percent of the bets.

However, the Packers' -650 moneyline at DraftKings has been backed by 75 percent of the bets.

Rodgers, the same player who threw 48 regular-season touchdowns and five more in the playoffs, was held to 133 passing yards and got picked off twice in the 38-3 loss to New Orleans last week.

The offensive line and running backs didn't help matters as the Packers were limited to 43 yards on 15 carries. The defense gave up five Jameis Winston touchdown passes.

A matchup with the Lions usually makes any troubles for Rodgers and the Packers go away. He's led them to nine wins in 11 home games against the Lions with 21 touchdowns and just four interceptions. The Packers have also won their last eight home openers.

The Lions were down 24 to San Francisco in the fourth quarter of Dan Campbell's head coaching debut, then scored 16 points and got the ball back to make things interesting in the closing seconds of a 41-33 loss.

"They had an opportunity right at the end of the game to tie the game," Packers coach Matt LaFleur said. "That tells you everything you need to know about the Detroit Lions."

Campbell, an assistant head coach and tight ends coach with New Orleans before getting the Lions job, expects to see an angry Packers squad on Monday.

"New Orleans kicked the hornet's nest, so we're going to get everything they've got," he said.

"They're coming off a loss. So are we," Campbell said. "We don't like that taste either. We've just got to clean it up. We're trying to build a belief and a certain style of play."

Williams will have some extra motivation going against his former team for the first time. He signed a two-year contract with the Lions as a free agent in March.