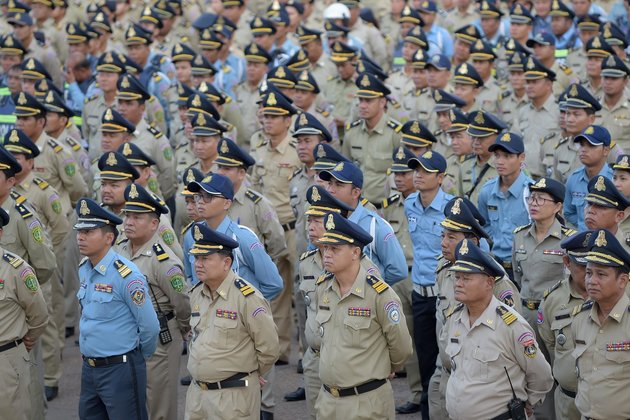 China's embassy in Cambodia has requested assistance from the Cambodian government in arresting Chinese nationals who are suspected of committing crimes in the Southeast Asian country, and deporting them back to China, officials told RFA's Khmer Service

The embassy told the Cambodian national police it wanted both to protect innocent Chinese in Cambodia, as well as prevent kidnappers from tarnishing the reputation of Chinese in the country.

Sar Thet, the deputy national police chief and chief of the Phnom Penh police department, told RFA that the embassy asked for stronger cooperation in security out of concern for Chinese tourists and investors being targets of violence and kidnapping committed by Chinese.

Hu Wei, the director of the embassy's overseas Chinese affairs office, made the request while meeting with Chief Sar Thet in the Cambodian capital on Monday.

"He wants to [enhance] our [collaborative] working connections so that the embassy can monitor Chinese nationals who come [to Cambodia] for investment or travel," Sar Thet said.

The police chief said that during the discussion, he and Hu agreed to an exchange of police personnel between the two countries, so that they could be better prepared to maintain security in Cambodia, as there were many recent crimes committed by Chinese in Phnom Penh and Preah Sihanouk province.

It is because of these "bad Chinese" that Hu asked for help in arresting them so they could face punishment in China.

China's ambassador did not respond to a request for comment from RFA.

Am Sam Ath, deputy director of Cambodian rights group LICADHO said it was wrong to send Chinese accused of crimes in Cambodia to China to face trial.

"If [they] broke the law [in Cambodia] and are only sent back to China without having to face trial under Khmer law, they will have no reason to fear the law [while in Cambodia]. It will not be implemented effectively," he said.

He said the Chinese nationals who commit crimes in Cambodia should be sentenced in Cambodia. Only after fulfilling their sentences as laid out in Cambodian courts can they then return to China, and at China's digression, they could be investigated further and sentenced again in Chinese courts if other crimes are revealed, Am Sam Ath said.

Hu's request was made a few days before police in Kandal province arrested three Chinese and rescued a Chinese victim of kidnapping on Wednesday.

Provincial Police Chief Eav Chamroeun told local media that the three suspects kidnapped the victim, then they tried to escape to Phnom Penh, where they are staying.

The police chief said the arrest was made after police noticed the victim raised his mobile phone out of a car window. The phone displayed a translated message that said the three suspects were kidnapping him.

Police immediately stopped the car and arrested the three suspects, then seized evidence including several weapons, two passports and some documents.

The three suspects were brought to the provincial police station for questioning. Police are still building the case against them, the chief said.