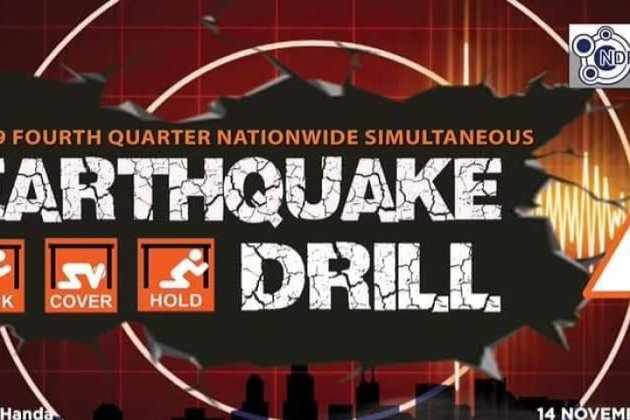 The NSED was held at the Cabaroan-Cabalangegan Elementary School, as the city's pilot area, at exactly 9a.m.

4TH QUARTER NSED. Students of Cabaroan-Cabalangegan Elementary School in Vigan City, Ilocos Sur participate in the 4th Quarter Nationwide Simultaneous Earthquake Drill (NSED) spearheaded by the City Disaster Risk Reduction and Management Office on Thursday, November 14. NSED, a major endeavor spearheaded by the Office of Civil Defense (OCD), is comprised of a series of simulation exercises conducted all over the Philippines to instill a culture of disaster preparedness among Filipinos and promote disaster awareness. (photo from the Facebook page of Vigan City PH)

NSED, a major endeavor spearheaded by the Office of Civil Defense (OCD), is comprised of a series of simulation exercises conducted all over the Philippines to instill a culture of disaster preparedness among Filipinos and promote disaster awareness.

It seeks to educate the public on disaster preparedness against earthquakes and tests the contingency plans of Local Disaster Risk Reduction and Management Councils (LDRRMCs) in relation to earthquake scenarios and other similar events.

In partnership with various national and local agencies, the drill seeks to intensify the local communities' earthquake and tsunami preparedness and strengthen the commitment of local government units in building safe communities.

It further bolstered by OCD's Bida ang Handa campaign, which encourages the public to join the NSED.

The main goal of the activity is to gather the maximum number of commitments via social media.

Individuals and groups posted their videos on social media with the #BidaAngHanda hashtag featuring preparedness measures to promote disaster preparedness at all levels.

In the Ilocos Region, the municipality of Caba in La Union served as the regional pilot area.

A post from the OCD's Facebook page showed that students, faculty and staff of Caba Central School as well as municipal employees, market vendors and locals performed the "duck, cover and hold" technique during an alarm signifying magnitude 7.2 earthquake generated by Tubao fault.

Evacuation procedures was observed leading to the pre-determined evacuation area.

The first week of the NBA's "bubble" plan to keep its teams safe from the coronavirus proved successful. The league ...