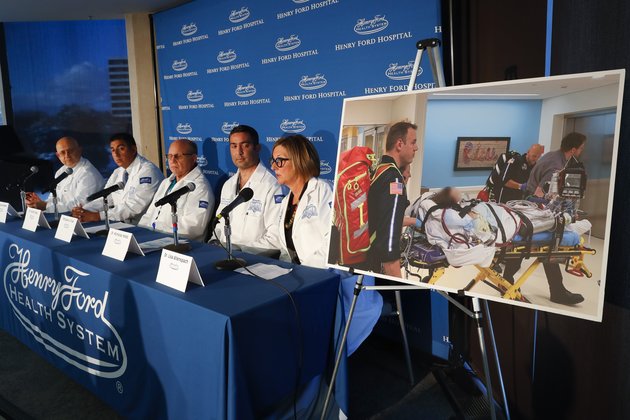 A 17-year-old male in Michigan is said to be the first person in the United States to receive a bilateral lung transplant for vaping-related injuries.

"What I saw in his lungs is nothing that I've ever seen before, and I've been doing lung transplants for 20 years," said Hassan Nemeh, M.D., surgical director of the Thoracic Organ Transplant System at Henry Ford Hospital in Detroit.

First admitted to Ascension St. John Hospital in Detroit in September, the then-16-year-old showed symptoms consistent with pneumonia. As his condition deteriorated rapidly, however, he was transferred to Children's Hospital of Michigan after less than a week and placed on life support.

Doctors said they took dramatic measures to save the teen's life.

"At one point, we just looked at each other and said, 'Let's just go in your car,'" said Nicholas Yeldo, M.D., of Henry Ford Hospital, describing how the doctors transported a portable ECMO machine in the trunk of Nemeh's SUV. ECMO is a life support system that stands for extracorporeal membrane oxygenation.

After more than a month on life support, the patient received a successful double lung transplant Oct. 15. Doctors described the teen Tuesday as talking, eating and able to walk on his own.

The patient and his family have remained anonymous, but they provided a statement for the press conference.

"Within a very short period of time, our lives have been forever changed. From the typical life of a perfectly healthy 16-year-old athlete - attending high school, hanging out with friends, sailing and playing video games - to waking up intubated and with two new lungs," stated the family.

"If this press announcement saves just one person, prevents others from vaping or inspires someone addicted to seek help to quit, it is surely a step in the right direction," said the patient's family.

According to the Centers for Disease Control and Prevention (CDC), more than 2,000 people in the U.S. have suffered lung injuries related to vaping, and at least 39 people have died.

Health officials have pointed to vitamin E acetate, an additive found in vaping products, as a likely culprit. Previously, the CDC linked vaping products containing THC with the mysterious injuries.

Young adults between the ages of 18 and 29 are more than twice as likely to vape than their older counterparts, according to a Gallup poll. Conversely, they are less likely than 30- to 64-year-olds to smoke tobacco cigarettes, signifying a major break from the smoking trends of previous generations.

According to the CDC, however, rates of tobacco use are rising among America's youth. Last year, 4.9 million middle- and high school students used tobacco, an increase from 3.6 million in 2017.

"This increase - driven by a surge in e-cigarette use - erased past progress in reducing youth tobacco product use," stated a CDC Vital Signs report.

On Monday, President Donald Trump tweeted that he will meet with representatives of the vaping industry, saying, "Children's health & safety, together with jobs, will be a focus!" Trump has made similar comments in the past, most notably when he proposed a ban on flavored e-cigarettes, which tend to attract younger people.

Recently, the president's language on vaping has expanded to include jobs in the vaping industry that might be lost to regulation.

While many medical professionals lauded efforts to curb vaping in the U.S., opposition from the vaping industry, pro-vaping advocates and politicians have challenged these efforts.

The Washington Post reported that Trump's campaign manager advised him to back off of the issue amid concerns it may hurt his chances for reelection.

Pro-vaping advocates held protests, arguing that vaping has helped them stop smoking cigarettes, and they consider vaping to be a better alternative.