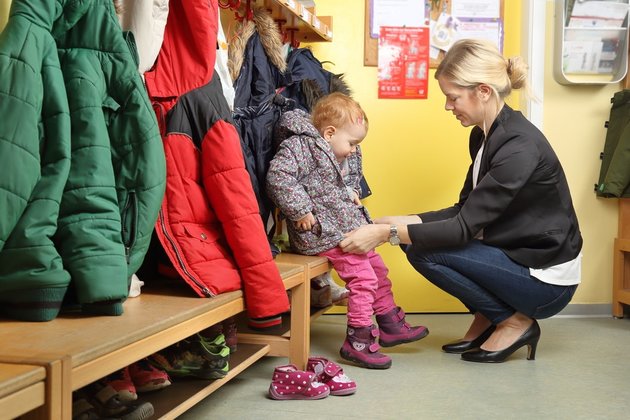 In the UK, women with children are less likely to be in paid work than men who have children or women who don't have a family. While some of this difference is down to personal choice, there is concern that the availability of childcare could be affecting the decisions women make about combining motherhood and paid work. Childcare prices vary across the UK, as do wage levels, but does this make a difference? And what other factors help or hinder women who are returning to work?

To find out we used Understanding Society, the UK Household Longitudinal Study to look at women before they had a baby and the work choices they made for three years afterwards. The information that respondents give to this survey allowed us to bring together information on women's employment, where they live and their extended family life. We worked with Coram Family and Childcare on this research and used their information on local childcare prices.

According to the data, 67% of women were in some form of employment before having a child: 37% were employed full-time, 17% were employed part-time, 13% were self-employed and 33% were out of the labour force. Three years after having a child, a large proportion of women (55%) were still in employment, but there was a clear shift towards part-time working: 28% of mothers worked part-time, 20% worked full-time, 7% were self-employed and 45% were not in paid employment.

Expensive childcare makes it less likely that women will return to work. When we looked at the factors which influenced women's decisions about work after having a child, one of the important issues seemed to be the price of childcare, particularly for women who work part-time. Women who lived in the top 25% most expensive areas of the UK for childcare costs were significantly less likely to take up part-time work compared to women who lived in areas with cheaper childcare.

Between 2010 and 2018, weekly full-time childcare prices in the top 25% most expensive local authorities averaged about Pound 255 (based on full-time prices for children aged under two). During that period, the median weekly earnings of full-time female employees in these areas were around Pound 530. In the 25% least expensive local authorities, the equivalent figure for childcare prices was Pound 160. However, the median female earnings were also much lower - around Pound 425 per week. In general, places with higher childcare prices were located in the south of the country - especially in and around London - and lower prices were in the north.

For women in full-time jobs, childcare costs seemed less influential in their decision to work. Predictably, the prices of childcare were higher in places were women tended to earn more. But even high-earning mothers were less likely to take up part-time work if they lived in areas where childcare costs were in the top 25% of the UK prices.

Wider societal and cultural trends around which member of a working couple is more likely to give up part or all of their working life is another piece of work for the future.

Access to informal childcare, such as grandparents looking after grandchildren, also affected whether women were likely to return to work. We found that 74% of women who used informal childcare had returned to work by the time their child was three years old, compared to just 47% of women who didn't choose to use, or didn't have access to, this option.

Women often care for other family members as well as their new baby - and this also made a difference to whether they return to paid employment. Mothers who had caring responsibilities beyond their child were more likely to leave the workforce after becoming a mother, even if they worked before having a baby.

Read more: The ageing population is a threat to women's economic welfare

Single mothers seemed to be hit particularly hard by the demands of combining work and family life - the data from the Understanding Society survey showed that raising a child on your own made it more difficult to work. We found that the proportion of mothers who returned to work, or took up employment, after the birth of their child was much higher for women who lived with a partner.

Supporting mothers who want to remain in, or return to, the workplace increases family income, reduces the need for benefits and improves productivity by retaining women's valuable skills. Costly childcare seems to be a particular barrier for those women who wish to combine part-time work with caring responsibilities.

In contrast to new mothers, we found that relatively few fathers changed their employment pattern within three years of having a child, with more than 80% staying in full-time work or being self-employed. Providing more affordable childcare and supporting women to return to work could give all parents, whether mothers or fathers, single or living with a partner, more choices about how they combine work and family life.