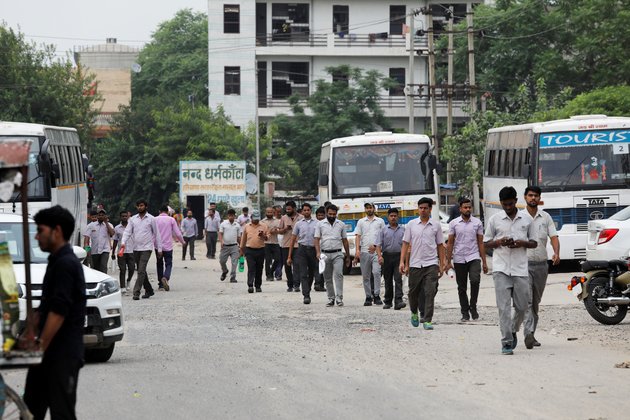 NEW DELHI - Four years ago, an optimistic Gopal Singh built a four-story house and opened a shop with the money he earned from the 22 rooms he rented to migrant workers in Kasan village in India's northern Haryana state. As the country's auto sector boomed, labor from poorer states had flooded his village that lies adjacent to a factory of the nation's biggest automobile manufacturer, Maruti Suzuki.

Now there are no takers for his rooms. "In every building there are at least five or 10 rooms lying vacant," said Singh. "Earlier, rooms were always booked and tenants used to line up to find accommodation. Now there are empty rooms and no tenants."

As auto plants and ancillary units lay off an estimated 350,000 workers due to plummeting sales, thousands are leaving the village. For rural areas like Kasan lying in the vicinity of big car factories, that means a reversal in fortunes along with the auto industry, which is struggling with its worst downturn in two decades amid a sharp economic slowdown.

India's automobile industry counted as one of the country's success stories, accounting for nearly half of the country's manufacturing output and employing 35 million people directly and indirectly.

As villages like Kasan raced to accommodate the swelling tide of workers employed by the auto plants, they became a symbol of how the boom in the automobile sector was changing the face of India's countryside.

The once sleepy hamlet had transformed as it raced to cater to the huge flow of migrant workers. Farmers, who used to make a modest living from adjoining fields, became landlords and shop owners. Some built four-story structures with dozens of rooms to rent, others opened shops to cater to the workers who outnumbered the residents.

It brought new opportunities for residents like Dharam Bir, who opened a shop selling groceries and other goods. "We only depended on farming earlier," he recalled. "Since people came to our village and rental incomes increased, we set up shops and business became good."

Amid the newfound affluence, motorcycles and cars jostled with goats in its narrow lanes and village homes became fancier.

With the economy taking a hit and workers leaving Kasan, far fewer customers are buying shoes, clothes and groceries in the narrow lanes of the village. Barbers complain that not many men walk in for a haircut. "If I compare my sales to three years ago, I am only selling 45 percent of what I made earlier," said Kumar Pal, who sells shoes and garments.

Among the workers packing up to leave is Dinesh Kumar Singh, who came from the underdeveloped state of Bihar 10 years ago to live in Kasan. Three months back, he was laid off from a company that transported cars. Singh's job search has been futile - he is told there are no openings wherever he goes. "I am paying rent from my savings. Now I have to return to my village," he said. "What will I do here without work?"

The loss of his job is also bad news for his family - his salary supported his parents and sister who live in a far less affluent village in Bihar state. Due to declining farm incomes in recent years, millions of rural families depend on money sent home by migrant workers. But as people like Kumar lose jobs, distress is deepening in some of India's poorest states.

Sectors such as construction and manufacturing absorbed tens of thousands of those who wanted to leave farming. With a sharply slowing economy, many construction projects have stalled and auto factories are cutting back on production.

"The problem of slow growth in agriculture is compounded by the slowdown in the labor market," said economist Santosh Mehrotra at New Delhi's Jawaharlal Nehru University. He calls it a double whammy for India's vast rural areas, where two-thirds of the population live.

India's economic growth rate averaged a brisk 7.23% from 2014 through 2018. When growth slipped to a 5% annual rate from April to June - the lowest in more than five years - the government announced a series of measures to kickstart the economy. They included steps to revive investment and spur slowing consumer demand.

But economist Arun Kumar said while most policies have focused on reviving the corporate sector, not enough is being done to boost rural incomes. "The government needs to invest in infrastructure, health and education projects in rural areas, which are employment intensive and which will revive demand."

For the time being, the residents of Kasan have little choice but to tighten belts once again. "My income has come down so I will have to reduce my monthly expenses," said Dharam Bir.