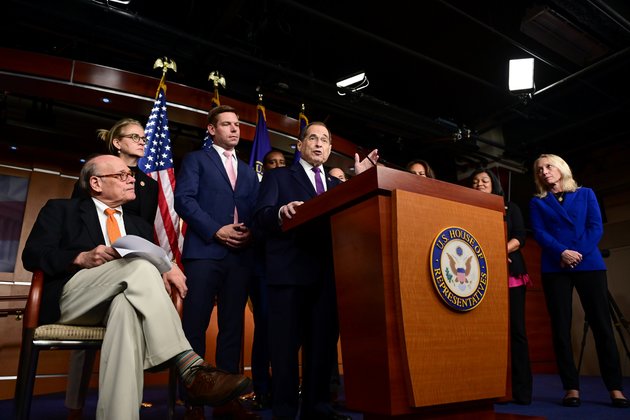 CAPITOL HILL - House Judiciary Democrats laid out new procedures for an impeachment inquiry into U.S. President Trump Thursday, closing a week of confusion on Capitol Hill. With fewer than 40 legislative days remaining this year, House Democrats are at odds over whether multiple investigations into the president already constitute an impeachment inquiry.

Democrats have tried to frame the debate as a matter of word choice but the answer could have serious political consequences for the way the party is perceived by voters headed into the 2020 presidential election year.

House Speaker Nancy Pelosi pushed back against accusations of confusion Thursday, saying her party has held firm to the same three principles of legislating, investigating and litigating the matter in the courts.

"People are impatient about it moving more quickly - we can't go any faster than the facts," Pelosi said

Pelosi has emphasized the need for a methodical investigation, an approach that has sometimes seemed at odds with House Judiciary Chairman Jerry Nadler, who has previously said the committee is already engaged in an impeachment inquiry. Nadler said Thursday the wording was of secondary importance to the committee's goals.

"Some call this process an impeachment inquiry, some call it an impeachment investigation. There's no legal difference between these terms," Nadler said. "Let me clear up any remaining doubt, this conduct poses a threat to our democracy, we have an obligation to respond to this threat."

The procedural vote Thursday allows the committee's chairman to designate certain meetings for examining information to determine whether it should recommend articles of impeachment. It would also allow witnesses at such meetings to testify for longer than under usual committee hearing rules.

The resolution would also call for Trump's legal team to respond in writing to any information presented.

Various legislative committees are looking into a number of matters concerning the president, including his failure to release his tax returns, his payment of hush money to stop publication of embarrassing stories, and the spending of taxpayer money at the president's hotels and properties.

At issue is the question of whether impeachment constitutes a vote on the House floor or, as Nadler has defined it, the investigation undertaken by his committee as it gathers evidence on impeachment offenses.

Democrats are torn between an investigation that could alienate some voters and fulfilling their Constitutional responsibility of oversight of the Executive Branch, a move many in the Democratic base wants to see happen.

Articles of impeachment would have to be voted on by the full House and it is doubtful the Republican Senate would vote to remove the president from office. In the US House of Representatives, the majority of Democrats support a formal inquiry to determine if impeachable offenses have been committed.

But many Democrats have refrained from saying if they would vote for impeachment, a key political consideration ahead of the 2020 election.

Earlier in the week, Jeffries told reporters, "I support the chairman's effort to hold this administration accountable. I support the investigation and all of its parameters. I support the fact that he's taking a close look at the obstruction of justice, abuse of power, and culture of corruption coming out of 1600 Pennsylvania Avenue."

Pelosi has repeatedly said the party must follow the lead of public opinion on the divisive issue of a presidential impeachment. In a July 30 Quinnipiac University poll, only 32% of Americans said they supported such an investigation.

"I think it's important to understand that there is no daylight between the Judiciary Committee and the Speaker," said Rep. Pramila Jayapal, a co-chair of the Congressional Progressive Caucus who is also a member of Judiciary. "We can lead these platforms, and we can really help influence public opinion. It doesn't just happen and people look to the folks who represent them to make sense of what is happening. And I think that's what we have to remember is we shouldn't just follow the polling on something of constitutional importance like this, we should actually lead on it."

Republicans argue Democrats are tiptoeing around impeachment while attempting to shield themselves from the full political risks of a formal inquiry. Rep. Doug Collins, the ranking member on House Judiciary, compared Democrats' attempts to social media posturing.

"The Judiciary Committee has become a giant Instagram filter to make you appear that's something's happening this not," said Collins. "The difference between formal impeachment proceedings and what we're doing today is a world apart no matter what the chairman just said."

The lack of consensus could prove to be its own political risk, weakening Democrats' case against Trump.

Rep. Mark Meadows, who is stepping down from chairmanship of the House Freedom Caucus, Tweeted Wednesday "Ask a House Democrat whether or not they're impeaching the President and you'll get a different answer from all of them. It's not just that they don't have a case. They can't even get their story straight."