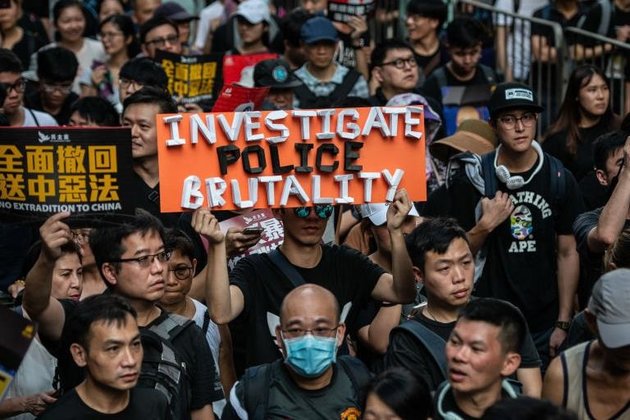 Anti-government protesters at Hong Kong's international airport have sought to limit potential damage to their pro-democracy cause after a peaceful sit-in devolved into chaos and massively disrupted air travel.

On Wednesday, after the airport was granted a court injunction to clear the terminals, only a few demonstrators remained in designated areas, greeting travellers with signs apologising for the events of the previous evening when clashes erupted between riot police and demonstrators.

"Sorry about what happened yesterday," one of the banners read, as calm returned to the airport.

"We were desperate. Please accept our apology."

The massive sit-in brought the first round of flight cancellations on Monday, around 180, as thousands of black-clad demonstrators packed the terminals.

When they returned en masse on Tuesday, they forced airport authorities to cancel some 400 flights.

By nightfall, the airport was mayhem, with police firing pepper spray at protesters who had seized two men and five demonstrators were arrested.

The most shocking event occurred on Tuesday when protesters surrounded, beat, and tied up two men from mainland China.

One was suspected of being a security officer, while another turned out to be a journalist for the Communist Party-backed Global Times. The journalist, Fu Guohao, was tied up to an airport trolley with plastic zip-ties and was found with a blue t-shirt reading "I love police", the same t-shirts worn by participants in a recent pro-police rally.

Tensions are running high. After 10 consecutive weeks of protests, the government has refused to make any more concessions to the protesters, whose demands include the total retraction of a controversial extradition bill which would allow suspects to be sent to mainland China for trial, an amnesty for all those arrested and also universal suffrage.

Firstly, protesters are "very paranoid about having police among them", Yuen told Al Jazeera, referring to an incident on Sunday where undercover police attacked and arrested demonstrators.

"I think that explains why they suddenly lost control."

Secondly, the pro-democracy movement is a leaderless one.

"It's very easy for a leaderless movement to make a mistake," Yuen said. "The nature of it is to always push the boundaries and be more transgressive, to overstep the line."

Not good, especially from the Chinese government and state media, both of which have pilloried the protesters.

Until recently, China had largely taken a backseat, censoring coverage of the protests in domestic media and not commenting publicly.

But in recent weeks, Beijing has begun openly condemning the protests and allowing state media to circulate information about them.

"Beijing is looking for protesters to slip up, and this provides the perfect opportunity."

"Using the sword of the law to stop violence and restore order is overwhelmingly the most important and urgent task for Hong Kong!" read the front page of the Communist Party-backed People's Daily on Wednesday.

On Chinese social media, a video of Fu, with his hands tied behind his head and yelling, "I support Hong Kong police, you can hit me now," has gone viral.

"The CCP likes to make heroes because heroes are really useful for public anger purposes," Ni said, referring to the Chinese Communisty Party.

Anti-government demonstrators sit in the arrival hall of the airport, after police and protesters clashed the previous night [Thomas Peter/Reuters]

While a group went to the airport to apologise, most protesters used Wednesday to regroup.

In a poll on messenger app Telegram, 76 percent of Hong Kong protesters voted to rest on Wednesday, with around the same percentage of respondents voting to apologise.

Protesters also flooded Telegram and social media with apologetic graphics, circulating images saying, "We apologise for our behaviour but we are just too scared."

Another expressed "sincerest apologies to affected travellers ... We ask for your understanding and forgiveness as young people in Hong Kong continue to fight for freedom and democracy."

Some even began discussing new ground rules, including not obstructing a journalist's work and how to deal with a suspected spy.

"I think there was definitely an escalation on the part of protesters," Yuen said. "But I think they realise ... tying up two people ... has tarnished the entire protest."

The aim of the airport protest was to win international support. But the events of Tuesday backfired and ended up "alienating the international community," Yuen said.

That being said, the protesters appear to have realised their mistake, and the nature of a leaderless movement also means "they will pull back, there will be correction," Yuen said.

"I'm quite confident ... there won't be a repeat of what happened last night," Mo said.

"Some members of the public will be quite put off last night."

Despite the public outcry over the incident, she does not think the democracy movement will lose public support.

"The protesters might have lost a bit of public support, but it can't be too much."

Protesters have "pan-society support," she said. Even if people disapproved of what the protesters did, "it wouldn't mean, 'Let's forget about this campaign, about this pro-democracy movement'".

"Things won't quiet down because there's no dialogue."