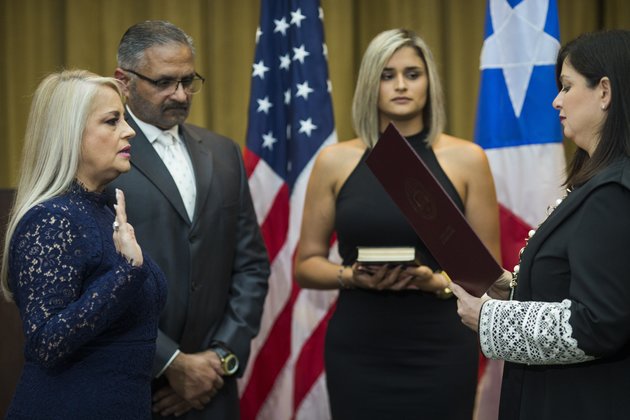 SAN JUAN, PUERTO RICO - Puerto Rico's new governor finally appeared to be overcoming some of the challenges to her authority on Wednesday following weeks of political turmoil on the U.S. territory, with key members of the majority New Progressive Party expressing support.

That may allow Gov. Wanda Vazquez, who has never held elected office, to turn her attention to the territory's lagging efforts to recover from 2017's devastating Hurricane Maria as well as grinding economic slump and debt crisis that has led to demands for austerity from a federal board overseeing its finances.

Senate President Thomas Rivera Schatz, who had been seen as her chief challenger, issued a statement on Facebook Wednesday backing her and saying he'd only been looking for a replacement because he thought Wanda Vazquez didn't want the governor's job - though his efforts had continued well after she said she did.

"It's up to all of us to work for Puerto Rico," he said. "The governor will have our collaboration, and I have expressed that personally."

Rivera Schatz had suggested the post go to the island's congressional representative, Resident Commissioner Jenniffer Gonzalez. But Gonzalez too issued a statement of support for Vazquez on Tuesday.

Under the territory's constitution, the governorship fell to Justice Secretary Vazquez on Aug. 7 because Gov. Ricardo Rossello resigned after intensive public protests and his attempt to name a last-minute successor were knocked down by the territory's Supreme Court.

Members of her party from across the island have since been falling in line to declare support and Vazquez so far has been spared the massive protests that drove Rossello from power due to outrage over government corruption, economic malaise and the leak of embarrassing conversations involving the governor and top aides.