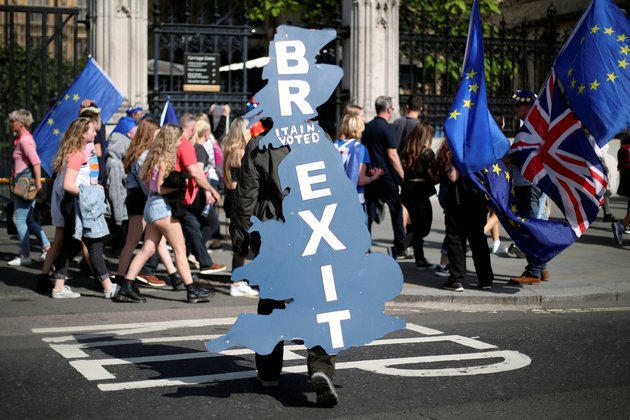 The man who was Britain's top finance official until three weeks ago accused Prime Minister Boris Johnson's Conservative government on Wednesday of steering the country toward a damaging no-deal Brexit that isn't backed by Parliament or the voters.

Philip Hammond, a Conservative legislator who stepped down as Treasury chief just before Johnson became prime minister last month, said ``leaving the EU without a deal would be just as much a betrayal of the referendum result as not leaving at all.''

LONDON - Hammond told the BBC that Johnson had moved from a tough negotiating stance to a "wrecking" one by insisting on changes to the withdrawal agreement between Britain and the EU that the bloc would not accept.

He said that while he believed Johnson wanted a deal, "there are other people around him whose agenda is different" _ an apparent reference to advisers such as Dominic Cummings, one of the architects of the country's 2016 decision to leave the EU.

Johnson has vowed that Britain will leave the EU on the scheduled date of Oct. 31, with or without a divorce deal. He is demanding the EU agree to major changes to the agreement the bloc made with his predecessor, Theresa May. The EU refuses to renegotiate, so a no-deal Brexit appears increasingly likely.

Many economists say that will trigger a recession and cause economic mayhem, with shortages of fresh food and other goods likely as customs checks snarl Britain's ports.

Johnson and other Brexit supporters argue that any short-term turbulence will be outweighed by new economic opportunities once Britain leaves the 28-nation bloc and can strike trade deals around the world _ notably with the United States. Critics note that the EU accounts for almost half of Britain's trade and argue that any new trade deals are likely years away.

Hammond criticized the government for perpetuating "myths" that the British people voted for a no-deal Brexit and that leaving the EU without a negotiated settlement would be painless.

"A no-deal exit will cause significant harm to the U.K. economy and, potentially, irreparable damage to the union of the United Kingdom," he added.

A parliamentary showdown over Brexit is looming when lawmakers return from their summer break in early September. Opposition legislators hope to take action to block a no-deal departure _ either by passing legislation or by bringing down the government and triggering an early election. To succeed they will need to persuade Conservatives like Hammond to vote against the government.

Johnson has refused to rule out suspending Parliament if legislators try to delay or prevent Brexit. Hammond said that would "provoke a constitutional crisis.''

House of Commons Speaker John Bercow, who controls the day-to-day business of Parliament, said he would seek to prevent the prime minister from overriding Parliament.

"If there is an attempt to circumvent, to bypass or God forbid to close down Parliament, that is anathema to me," Bercow told an audience at the Edinburgh Fringe Festival in comments reported by the Herald newspaper. "I will fight with every breath in my body to stop that happening."