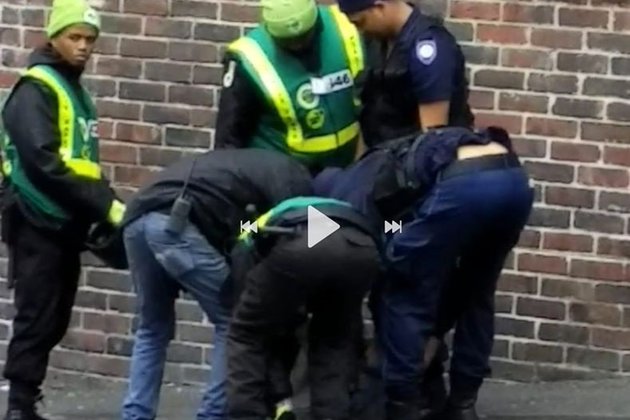 The City of Cape Town has confirmed it is investigating an alleged assault on what appeared to be a homeless man, which according to a witness saw the person beaten, pepper-sprayed, shoved and thrown to the ground.

Executive director for the safety and security directorate Richard Bosman said the probe was underway.

"We have since obtained statements from the officers involved in the incident. We have also secured video footage from a nearby CCTV camera," Bosman said.

Rudy Oosterwyk, who witnessed the incident, in his written complaint to the city said he had been walking down Leeuwen Street near the Western Cape High Court last Tuesday afternoon when he saw six men surrounding an older man sitting up against a pole.

Three wore Cape Town Central City Improvement District uniforms, two in Law enforcement gear, and one a jeans with a radio visible at his waist.

Oosterwyk said the men were screaming at the older man when one of them pulled his cap from his head, throwing it in the street.

"At this point I could see that the older man was in danger or on trouble as the men were becoming more and more physical with him, pulling at him and shoving him while he was sitting," his complaint reads.

One of the security guards pulled the man up by the scruff of his neck, holding him up by his collar, Oosterwyk alleges. The older man was shoved around, pushed and pulled even after he shouted and asked the uniformed men what they were doing.

The elderly man was sprayed three times with what appeared to be pepper spray, Oosterwyk relayed.

"The old man started screaming 'help my, help my', and it is at that point that he was thrown to the ground. The six security men then held the man down to the ground and it appeared that they used a cable-tie to tie his hands behind his back.

"The old man was crying and screaming and after a minute or two, he went quiet. The six security men continued to stand around him. It also looked like they were holding him down with force. I thought at the time that this, too, was unnecessary as the old man was clearly neutralized by the pepper-spray and being thrown to the ground."

Oosterwyk had during the scuffle recorded what was happening. He said another man in unifom told him not to take pictures "without asking questions".

Oosterwyk, who declined to circulate the video out of respect for the man, said he had also lodged a complaint with the SA Human Rights Commission.

He said he was "badly shaken" after witnessing what happened to the "poorly dressed" man, who he had assumed was homeless.

"I walked to my car and drove past the site of the attack; the old man was still lying on the ground. He appeared not to be moving and I was concerned about his state. As I was driving past, a City of Cape Town vehicle parked on the corner where the incident took place.

"It appeared that this vehicle - a bakkie - was going to be used to transport the old man. It was clear that none of the security officials established the degree of injury to the old man and if he was indeed in need of urgent medical attention."

Oosterwyk, who years ago donated a kidney, said he has limitations and was unable to intervene in "what was not law enforcement procedure, but brutality".

He added that while there had been much talk about the City of Cape Town being "punitive" towards street dwellers in the enforcement of by-laws, it was a "shocker" to see the alleged assault first-hand.

"I don't care what happened before that. I am more concerned with what happened in the seven minutes which I witnessed," he said.

"It's hard to be poor in the City of Cape Town," Oosterwyk believed.

He called on the municipality to be more human-centric, as it would mean it would govern differently.