Government and protesters in Hong Kong urged to act peacefully 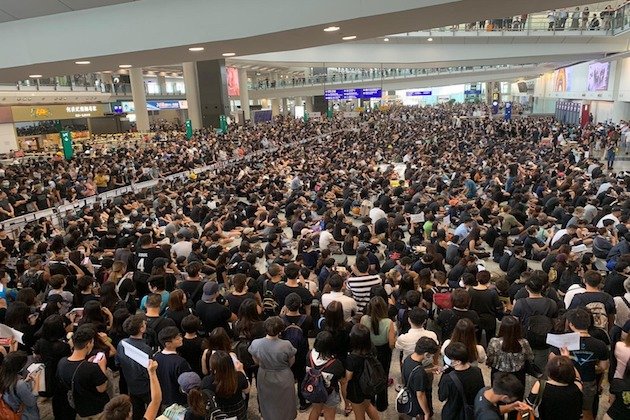 After two consecutive days of chaos at Hong Kong International Airport, the UN High Commissioner for Human Rights (OHCHR) Michelle Bachelet expressed her concern and condemned "any form" of violence or destruction of property and urged the demonstrators to "express their views in a peaceful way".

The High Commissioner is "concerned by the ongoing events in the Hong Kong Special Administrative Region (SAR), and the escalation of violence that has taken place in recent days", her spokesperson, Rupert Colville, told reporters in Geneva on Tuesday.

The protests began with a proposed bill that would have enabled China to extradite individuals from Hong Kong to be tried on the mainland. Although the extradition bill was suspended in mid-June, the protesters want it officially withdrawn.

The major economic hub was under British control until 1997, when it was handed back to China under the governing principle known as "one country, two systems". Despite being under the authority of the Chinese Government, voters in Hong Kong elect their own Legislative Council.

According to news reports, Tuesday's protest came a day after demonstrators occupied arrival and departure areas inside what is one of the world's busiest airports. While service resumed on Tuesday morning, protestors returned, and flight cancellations increased, causing tension between protestors and some travellers.

Ms. Bachelet is staunch in her belief that "the only sure way to achieve long-term political stability and public security" is by creating channels for people to participate in public affairs and decisions affecting their lives, said Mr. Colville.

"The rights of freedom of expression and peaceful assembly and the right to participate in public affairs are expressly recognized in the Universal Declaration of Human Rights, as well as the International Covenant on Civil and Political Rights which is incorporated in the Basic Law of the Hong Kong SAR", the human rights chief maintains.

Mr. Colville said that there was "credible evidence" of law enforcement officials using some anti-riot measures which are "prohibited by international norms and standards".

As an example, he said that officials have been seen firing tear gas canisters into crowded, enclosed areas and directly at individual protesters on multiple occasions, "creating a considerable risk of death or serious injury".

"The Office would urge the Hong Kong SAR authorities to investigate these incidents immediately, to ensure security personnel comply with the rules of engagement, and where necessary, amend the rules of engagement for law enforcement officials in response to protests where these may not conform with international standards", Mr. Colville stressed.

Moreover, OHCHR urged the authorities to "act with restraint" and to respect and protect peaceful protestors while simultaneously ensuring that law enforcement officials respond to violence and in conformity with international standards on the use of force, "including the principles of necessity and proportionality".