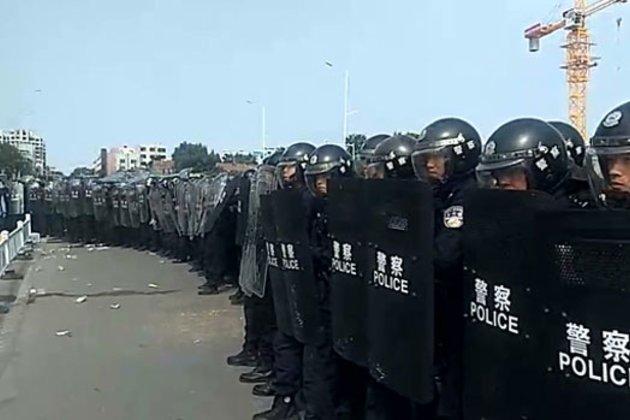 Chinese authorities in the eastern provinces of Jiangsu and Shandong on Friday handed down sentences of up to six years' imprisonment to 18 People's Liberation Army (PLA) veterans following mass protests in two cities last October.

Proceedings against the veteransconsidered a politically sensitive group by the ruling Chinese Communist Partyhave been shrouded in secrecy since, however.

Sentences ranging from suspended prison terms to jail terms of up to six years were handed down by courts in Jiangsu's Xuzhou city and Shandong's Weifang city on Friday.

"obstructing officials in the course of their duty," and "gathering a crowd to disturb public order," state news agency Xinhua reported.

Xinhua said the defendants were accused of "falsely disseminating rumors" of police beatings of fellow veterans, and had committed crimes "under the banner of veterans."

None of the defendants appealed, and several were handed lighter or suspended sentences for "confessing" to the charges, and showing remorse for their actions, Xinhua said.

Thousands of military veterans converged on Shandong's Pingdu city last October for a weekend of protests over police beatings of their former comrades-in-arms.

Last June, authorities in Jiangsu struggled to contain growing protests in Zhenjiang by at least 1,000 veterans enraged at the beating of a fellow veteran.

Hundreds of former armed forces personnel clad in military-style clothing gathered on a major road in Zhenjiang, shouting slogans and waving national flags, in a major public show of strength following a mass protest outside the Central Military Commission in Beijing in October 2016.

A source close to the family, who gave only her surname Wang, said the authorities currently have all of the relatives of PLA veterans under close surveillance by "stability maintenance" officials.

She said the relatives weren't even informed that their loved ones had stood trial, and had been prevented from finding lawyers to represent them, with only lawyers appointed by the government allowed to act for them.

"They wouldn't let [Yu's wife] go, and they didn't even inform her," Wang said. "They didn't know what was happening; they knew nothing."

"The police told her she wasn't allowed to go," she said. "I told her to get a lawyer as quickly as possible, and she did, but the government had already allocated a lawyer to him."

A Shandong-based veteran who requested anonymity said news of the case had only just appeared with the Xinhua article, and declined to comment for fear of reprisals.

"When everyone read that, after I posted it in the group chat, they didn't want to speak out," the veteran. "It should be I who contacts you from now on."

A veteran Chinese journalist surnamed Chen said the sentences were intended as a deterrent to further protests by PLA veterans, and had sown despair among many in the community.

"It will definitely scare off some of them, and make people more afraid to stand up for their rights if they are likely to face this kind of suppression," Chen said.

"However, some people will learn the true state of our society from this [case], and find other ways to stand up for their rights," he said. "I don't think that this sort of suppression will get to the root of the problem."

The government has repeatedly promised a boost to benefits and opportunities for veterans, but activists say local governments are simply failing to deliver.

Reported by Wong Siu-san and Lee Wang-yam for RFA's Cantonese Service, and by Shi Shan for the Mandarin Service. Translated and edited by Luisetta Mudie.