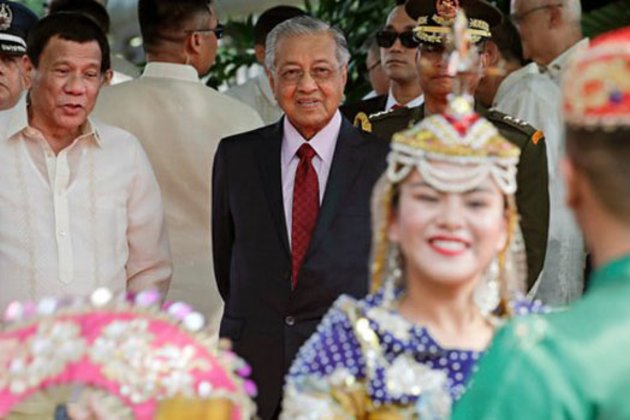 Mahathir, 93, is in Manila for the first time since his stunning electoral triumph last year.

Mahathirs visit comes shortly after voters in the southern Philippines agreed to establish the Bangsamoro Autonomous Region in Muslim Mindanao. The region was created five years after a peace deal brokered partly by Malaysia ended the separatist rebellion of the Moro Islamic Liberation Front.

Mahathir, who also made official visits to the Philippines during his first stint as prime minister, in 1987 and 1994, said he discussed security matters with Duterte.

We discussed a wide range of issues on bilateral relations between Malaysia and the Philippines, as well as regional and international issues of mutual concern, he said.

Mahathir said he assured the Philippine leader of Malaysias commitment to address the serious issue of terrorism and violent extremism.

Together with Indonesia, he said, Malaysia and the Philippines had agreed to undertake unilateral maritime and air patrols to tackle the growing security challenges.

The three nations began trilateral patrols in June 2017 after pro-Islamic State militants launched a siege in the southern Philippine city of Marawi. Fighter jets pounded the militants with heavy bombs during a five-month battle that ended in October 2017 and killed at least 1,200 people, including Isnilon Hapilon, the acknowledged IS leader in the Philippines.

Mahathir said Manila and Kuala Lumpur must boost economic ties, as he assured Duterte of Malaysias desire to continue to be of help in the development of Mindanao.

But he warned that extremism would continue to pose a problem.

I see things getting worse in the future, Mahathir said. The reason is very simple: We refuse to acknowledge the causes. Terrorism is caused by something. Identify the cause. Try and deal with the cause, and eliminate the causes then therell be less extremism.

But ignoring the cause and trying to fight against extremism as if it is conventional war, youre not going to succeed, he said.

The two leaders also discussed Chinas continuing militarization of the South China Sea, the disputed region that is also claimed by Malaysia, the Philippines, Brunei, Vietnam, as well as by Beijings rival, Taiwan.

Duterte, an ardent Chinese backer, has preferred to engage Beijing on friendlier terms, encouraging investments in the Philippines among others. He has made trips to China and personally encouraged investors there to come in.

Duterte had also set aside a 2016 ruling of an international arbitral tribunal that junked Chinas vast claims in the sea region, after his predecessor, Benigno Aquino, took Beijing to court for illegally occupying a territory west of the Philippines that, according to analysts, was clearly within Manilas exclusive economic zone.

Last week, Washington assured Manila of military backing should it come under attack in the South China Sea. But the Philippine defense secretary, Delfin Lorenzana, has instead called for a review of the countrys mutual defense treaty with the United States, fearing that the Philippines would be sucked into war into a regional war.

We emphasized the importance of maintaining and promoting peace, security, stability, safety and freedom of navigation and overflight over the South China Sea, as well as the peaceful settlement of disputes, Duterte told reporters Thursday.

This is, without resort to the threat or use of force, in accordance with the universally recognized principles of international law, he said.

Before the news conference, Mahathir said in a television interview that Beijing should clarify what it meant by ownership in the South China Sea, as he emphasized that the region, where more than U.S. $5 trillion of global trade passes through each year, must remain open to navigation.

We have to talk to China on the definition of their claims and what is meant by their ownership or so-called ownership they claim to have so that we can find ways of deriving some benefits from them," Mahathir told ANC television in Manila.

Mahathir also said that while he respected Manilas economic strategy, any infusion of investments in the Philippines should be properly defined.

Foreign direct investments should not involve huge numbers of foreigners to live in the country, he said, clearly alluding to a Philippine Senate inquiry last year that showed at least 200,000 Chinese had flocked to the country since Duterte took power in 2016.

So long as they are not going to be permanent resident is not a danger to the Philippines, Mahathir said.

But if huge number of any foreigners live and stay in the country or even to influence economy, then you have to do some rethinking whether it is good or bad or the limits that we have to impose on them, he said.

Mahathir noted that Beijing had been accused of using debt-trap diplomacy, in which Beijing intentionally extends excessive credit with the alleged intention of extracting economic or political concessions from the debtor country.

If you borrow huge sums of money from China and you cannot pay, you know when the person is a borrower he is under the control of the lender, he said. So we have to be very careful about that.