US: China Puts Pressure on Border With North Korea 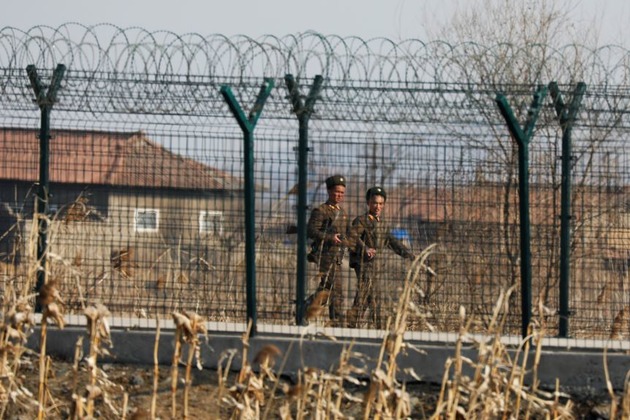 BEIJING - Chinese officials have told the U.S. that they've tightened inspections and policing along the border with North Korea as part of U.N. sanctions aimed at halting Pyongyang's nuclear and missile activities, the top U.S. diplomat for East Asia said Friday.

China has a growing awareness of the urgent need to pressure North Korea into halting its testing of missiles and nuclear bombs, Acting Assistant Secretary of State Susan Thornton told reporters in Beijing. President Donald Trump's administration has made a renewed push to enlist Beijing's help in those efforts after a meeting between Trump and Chinese President Xi Jinping last month.

Touching on other areas of the relationship, Thornton said the new administration has not changed its commitment to greater engagement with countries in the Asia-Pacific region or its approach to naval operations in the disputed waters of the South China Sea.

FILE - Trucks move across the bridge linking North Korea with the Chinese border city of Dandong, March 3, 2016. China has banned imports of gold and rare earths from North Korea as well as exports to the country of jet fuel and other oil products.

On North Korea, the U.S. has seen a "shift in emphasis" in China's approach to its fellow communist neighbor, Thornton said.

"They've said that they have stepped up border inspections, beefed up sort of the policing function on the border, stepped up customs inspections," she said. Beijing has also done "a number of other things on companies" that have dealings with North Korea, Thornton said, without giving details.

The U.S. has been talking to Beijing about taking action against specific firms and is waiting to see what sort of action China will take, she said.

China has signed on to U.N. sanctions and suspended coal imports from North Korea through the rest of the year, but has been generally reticent about what other steps it may be taking to use its leverage as Pyongyang's most important trading and diplomatic partner.

Thornton said the U.S., China and others were also in talks on a future U.N. resolution on North Korea in order to cut the time needed to take action following another nuclear or missile test.

"So we're looking at trying to get going on the next set of major measures that would be taken in the wake of another provocation," Thornton said. Such measures could include ratcheting up economic pressure on the North by targeting trade in consumer goods, possibly including textiles, she said.

While China has repeatedly called for direct dialogue between Washington and Pyongyang, Thornton said Beijing officials now realize more pressure is needed before that can happen.

"And so they know now that they don't have, I think, as much time to try to bring the North Koreans to the table, get their calculus changed and get them to the negotiating table as they may have previously thought," she said.

Adding to that, Beijing also seems to have recognized that North Korea's actions were "undermining China's own security in pretty major ways," Thornton said.

North Korea exploded two nuclear devices last year, one of which it claimed was a hydrogen bomb. Satellite imagery suggests it could be ready to conduct its next test, its sixth, at any time.

An image made from video of a news bulletin aired by North Korea';s KRT on May 22, 2017, shows what was said to be the test-launch of a Pukguksong-2 missile at an undisclosed location in North Korea.

On Monday, Pyongyang said it is ready to start mass-producing a new medium-range missile after a weekend test-launch confirmed its combat readiness. The regime's oft-stated goal is to perfect a nuclear warhead that it can put on a missile capable of hitting Washington or other U.S. cities.

While there have been reports that the Trump administration was reconsidering policy toward Asia in the wake of former president Barack Obama's "pivot" to the region, Thornton said there had been no substantial changes.

That followed the Navy's sailing a destroyer near to Chinese man-made islands in the South China Sea on Thursday in a "freedom of navigation" operation aimed at challenging what the U.S. considers excessive territorial claims in the strategic waterway that Beijing claims virtually in its entirety.

Washington's approach is "engagement with Asia to show that we're still present in the region, that we're going to keep our security commitments in the region, certainly support for our allies and with North Korea as a focal point on the security front," Thornton said.