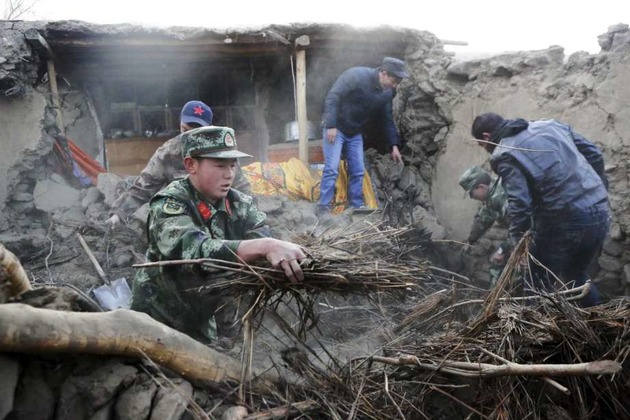 According to a Xinhua news agency report, the quake was measured at a depth of about 8.0 km and the epicentre was said to be in the south-east part of the Pamir Plateau.

The average altitude within 5-km around the epicentre is 4,347 metres.

The report further confirmed that a total of 9,200 people from the closest county to the epicentre, Taxkorgan which is about 1,250 km from Urumqi, capital of Xinjiang, had been relocated to safe places.

Wang Fuyou, the ruling Communist Party chief of the county seat, said in a statement that the quake was followed by aftershocks which were also felt strongly.

The Xinjiang seismological bureau had recorded 82 aftershocks following the quake, till 10 am local time on Thursday.

Wang added that the county government even sent security personnel to carry out search operations in Quzgun village, which was the worst-hit in the quake.

Local reports stated that in Quzgun Village, 820 heads of livestock were injured or killed.

The village also saw 1,520 homes collapsing due to the quake.

Meanwhile, as part of the rescue and relief operations, the quake emergency response headquarters confirmed that over 1,000 soldiers and police officers, and 1,500 civilians rushed to the quake-stricken areas and relief goods were also being sent.

So far, the quake has affected lives of more than 12,000 people.

Earthquakes are common in China's western region, although the low population density there often means casualties are low.

Previously, in 2003, a 6.8-magnitude quake in a county near the site of Thursday's quake killed 268 people.

In May 2008, China's Sichuan province was struck by its deadliest earthquake this century, a 7.9 magnitude temblor with a depth of 19 kilometres (12 miles) that killed nearly 90,000 people.