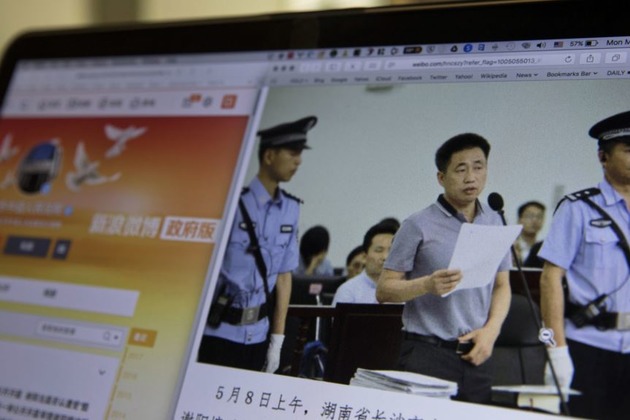 In a surprising reversal, Chinese human rights lawyer Xie Yang has recanted allegations that he was tortured while in custody and pleaded guilty to charges of subverting state power and disrupting court order.

Xie has worked on some of China's most sensitive and controversial cases and has long been an outspoken critic of the government and the country's legal system.

But on Monday, he told a court in China's central city of Changsha that that never happened and his legal rights were guaranteed, according to transcripts and videos posted on Chinese social media.

In allegations that were leaked to the public earlier this year through his lawyers, Xie alleged he was punched and kicked, and that authorities threatened to turn him into an invalid. The allegations spurred 11 countries to send letters to China asking it to investigate.

For authorities in China, the trial supports their argument that his allegation of torture was fabricated "fake news." Authorities may now believe the "open trial," which was blogged live on the Chinese social media site Weibo, will silence the domestic and international attention the case has gathered.

But that is unlikely.

Blow to 'rule of law'

For rights advocates and lawyers, both in China and overseas, the case still highlights abuse of the legal system by authorities and disregard of the principles of the rule of law. Xie's confession in court has only raised more questions about his treatment and spurred more calls for his unconditional release.

The U.S. State Department says it remains deeply concerned about the case and Xie's well-being, noting that his confession "appeared to be given under duress." It also called for his release as well as other lawyers detained in China.

Zhang Zhongshi, one of Xie's lawyers says everyone knows what happened in court, calling the trial a huge blow to the rule of law in China.

"For such a long time, he was disconnected from society without being allowed to meet anyone [from his family] or given any [legal] assistance," adding that it shows how he has completely been deprived of his legal rights. Zhang met at length with Xie in November of last year, more than a year after he was taken into custody.

In an eerily foretelling note Xie penned in January and sealed with his red wax thumbprints, the rights lawyer warned that if one day he did confess, "that will not be the true expression of my mind."

The note went on to say: "It may also be because I've been subjected to prolonged torture."

"I was fully aware of [the fact Xie was tortured] and heard from him," Zhang said. "I personally overheard him being tortured and saw with my own eyes where he had been hit in the head."

Xie, arrested in July of 2015, is one of more than 300 lawyers to be caught up in a nationwide dragnet aimed at those assisting dissidents and government critics. Most of those lawyers have been released, but 32 have been indicted and seven others are awaiting trial.

For most of the time during the past two years, Xie was denied access to his lawyers and at his hearing on Monday he was represented by a court appointed lawyer.

His wife, Chen Guiqiu, who has fled the country and is now in the United States, fears there is much more to his inexplicable reversal in court. She told VOA it could have something to do with the fact that since February, Xie has been prohibited from speaking with his lawyers.

Chen said those in the detention center where her husband is being held have told her he was placed under strict control, barred from using money and prohibited from speaking with others.

"If others speak with him, they will be punished and if he speaks with others, Xie would be punished. He was also frequently beaten by death row inmates. And now, he has denied all of these facts," Chen told VOA. "Isn't that strange?"

Chen said it may not be until much later that they will know the truth about what happened to her husband. The hearing ended on Monday, without the Changsha Intermediate People's Court announcing a verdict. Given his confession, a guilty verdict is expected, but how long he might be sentenced is uncertain.

"I have no expectations for what might happen next because the court has no principles. The law should set standards and norms for society, but given that they have completely ignored the basic principles of the law, I do not know what to expect," she said.

Late last week, just days before the trial, Xie's current lawyer, Chen Jiangang, and his family were detained in China's southern province of Yunnan. Chen told VOA his family was sent back to Beijing by plane, but that he was driven all the way home by authorities. On Monday, during the trial, he was still on his way back to China's capital.

Brian Kopczynski contributed to this report.