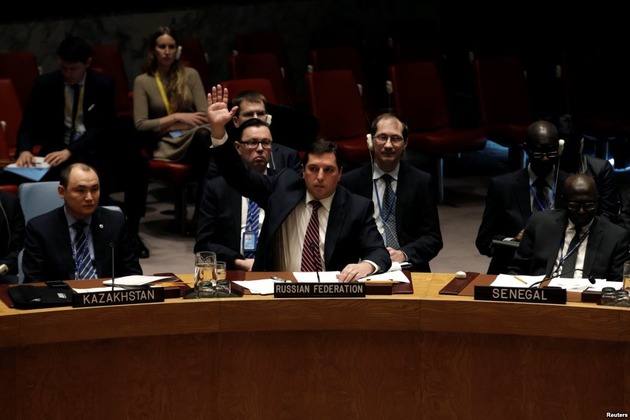 Russia and China have blocked a push by Western governments at the United Nations to punish the Syrian government over chemical weapons attacks.

Moscow and Beijing on February 28 vetoed a UN Security Council resolution that would have slapped sanctions on Syrian officials, military commanders, companies, and other entities allegedly involved in toxic gas attacks during the six-year-old civil war.

The vote marked one of the first standoffs between Moscow and Washington at the UN under U.S. President Donald Trump, who has said he would like to cooperate with Russia to fight Islamic State militants in Syria.

Trump's ambassador to the UN, Nikki Haley, said following the vote: 'It is a sad day on the Security Council when members start making excuses for other member states killing their own people.'

Moscow's deputy ambassador to the UN, Vladimir Safronkov, denounced criticism of Russia at the council as 'outrageous.'

Russian President Vladimir Putin said ahead of the vote on February 28 that the sanctions 'are not acceptable now' because they would hamper peace talks.

Based on reporting by Reuters and AFP