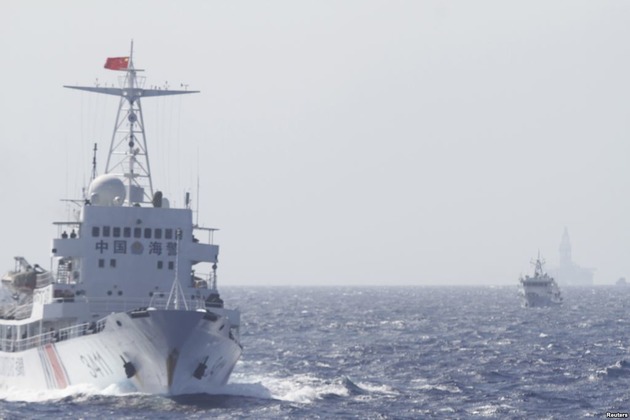 When the Philippines turned up gas off Palawan in 1976, China complained and stalled the project.

The positioning of a Chinese offshore oil driller's rig in the Gulf of Tonkin in 2014 sparked a boat ramming incident with Vietnam, where deadly anti-China riots also erupted. Vietnam formally protested another Chinese rig in April this year.

Joint exploration would imply a concession of sovereignty, Baker said.

"There's probably very little incentive for countries to actually go and try to do this exploration simply because it's very difficult to come to an agreement between different countries because it requires some acknowledgement of the right to exploit those resources, which means they have to give up some sense of sovereignty," said Carl Baker, director of programs at Pacific Forum CSIS in Honolulu.

"And for the Chinese this is very difficult to do, and for the Philippines and Vietnam, they've found it creates problems in domestic circles as well," he said.

The Philippines began more than 40 years ago looking for oil west of Palawan island, at Reed Bank. In 1984, a Philippine company found an oil field in the same region and it supplies 15 percent of the annual oil consumption in the Philippines.

The U.S. Energy Information Agency estimates 11 billion barrels' worth of oil under the sea and 190 trillion cubic feet of natural gas. Much of that lies under the continental shelves of Southeast Asian claimants, which are not disputed. Much of that potential energy has not been tapped yet, Baker said.

Falling oil prices and the costs of extracting any fuel from under the seabed limit the value of exports from any undersea discoveries, analysts add.

In Malaysia, the claimant country that has found the most fossil fuel to date, few are pushing for exploration, said Oh Ei Sun, international studies teacher at Singapore Nanyang University. Malaysia has about five billion barrels of oil and 80 trillion cubic feet of natural gas.