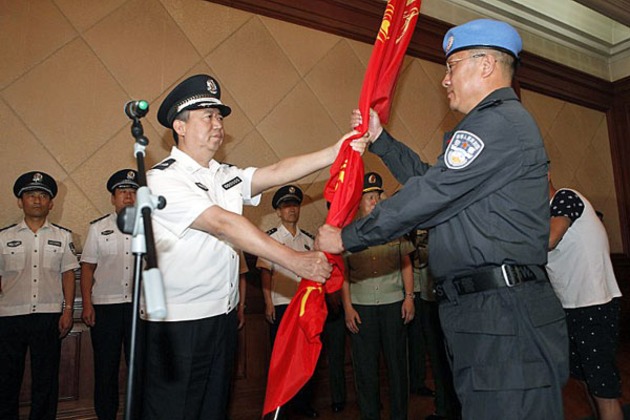 The appointment of Meng Hongwei, China's former vice minister for public security, as the new head of Interpol has sparked concerns that Beijing may use the organization to extend overseas crackdowns on Chinese dissidents who flee the country.

Meng was elected president of the international policing body by delegates at its general assembly in Bali this week, with immediate effect.

"The appointment of Meng Hongwei is alarming given China's long-standing practice of trying to use Interpol to arrest dissidents and refugees abroad," Amnesty International East Asia Director Nicholas Becquelin said in a statement.

"It seems at odds with Interpol's mandate to work in the spirit of the Universal Declaration of Human Rights," he said, adding: "There now needs to be close scrutiny of the kind of notices that Interpol issues at the request of the Chinese government."

In a post to his Twitter account, Becquelin pointed to a 2014 speech made by Meng, in which he called on recruits to "resolutely put politics, ideology and the [ruling Chinese Communist] Party first" in carrying out counter-terrorism work.

"Recently, the Chinese authorities have clearly bent, and even broken, the rules of criminal investigations when it comes to pursuing corrupt officials overseas," Richardson told RFA's Mandarin Service.

"Human Rights Watch will be keeping a very close eye on the activities of Interpol in future," she said.

U.S.-based rights activist Liu Qing said Beijing regards international organizations as a means to achieve its own policy goals, rather than abiding by their principles.

"The Chinese government has run into some obstacles in recent years when trying to pursue [its citizens] overseas, and that's why they are sure to use the fact that one of their highest-ranking police officers is now head of Interpol," Liu said.

"First of all, the president of Interpol wields huge power ... and the major world powers typically don't get given the job according to the principles set out when it was formed," Jia said.

"It's a foregone conclusion that China will try to use this position to achieve its own political goals," he said.

"China is looking to achieve superpower status, and where it lacks real power, it likes to focus on things that boost its prestige instead," Jia said.

Chinese political asylum-seekers and members of the ethnic minority Uyghur group are continuing to flee the country, often without documents, to avoid growing persecution under the administration of President Xi Jinping.

In November 2015, Chongqing-based activists Dong Guangping and Jiang Yefei were handed back to Chinese authorities by Thailand's military junta, in a move that drew strong criticism from the United Nations, which had already classified them as genuine political refugees.

Four months earlier, Thailand had forcibly repatriated nearly 100 Uyghurs to China, a move that drew criticism from human rights groups and protests in Turkey, where there is a large Uyghur emigre group.

"Chinese law enforcement agencies serve the Chinese Communist Party, and have used Interpol for a number of years to pursue dissidents and Uyghurs leaders overseas," he said.

"We call on the international community to pay close attention to this matter," he said.

Requests to the ministry for public security for a phone interview went unanswered during office hours on Thursday.

Meng said in statement following his election that Interpol should continue to adhere to its principles, without elaborating.

"We currently face some of the most serious global public security challenges since World War Two," he said, calling on the organization to "adapt to the changing security situation we see today."

Beijing blames Uyghur extremists for a string of violent attacks and clashes in recent years, launching a year-long "anti-terrorism campaign in their homeland of Xinjiang.

But critics say China's repressive policies targeting Uyghurs' livelihoods, language and religious practices are responsible for violence that has left hundreds dead since 2009, and that many of those targeted by "anti-terrorism" operations are peaceful advocates of independence for the troubled region.

Reported by Xi Wang for RFA's Mandarin Service, and by Wong Siu-san and Pan Jiaqing for the Cantonese Service. Translated and written in English by Luisetta Mudie.