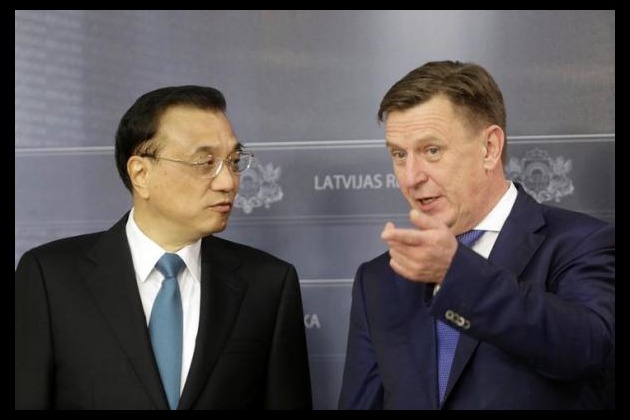 Riga (Latvia) Nov. 5 (ANI): Chinese Premier Li Keqiang has said that his country is willing to deepen pragmatic cooperation with Latvia in all spheres for mutual benefits and win-win results.

This remark was made by Keqiang during a meeting with his Latvian counterpart Maris Kucinskis.

The Chinese premier is currently on an eight-day tour of four Eurasian nations including Kyrgyzstan, Kazakhstan, Latvia and Russia, reports the Xinhua news agency.

This is for the first time since Latvia became independent from the Soviet Union in 1991 that a Chinese premier is visiting the country.

Li during the talks said that Latvia is regarded by China as an important transit station for the China-EU trade and it stands for participating in major infrastructure projects including Rail Baltica and the three-sea harbor district cooperation initiative, citing the nation's cost-effective equipment and rich experience in railway and port construction.

The three-sea harbor initiative was proposed by Li during the fourth leaders' meeting between China and the Central and Eastern European (CEE) countries held in the southern Chinese city of Suzhou last year which refers to cooperation programs concerning the Adriatic Sea, the Black Sea and the Baltic Sea.

Describing Latvia as China's good friend in the Baltic area, Li said it is an important partner of cooperation in the CEE and EU.

Li pledged to encourage exchanges at different levels and further lifting the bilateral ties on the basis of mutual respect and equality.

Kucinskis said that smooth cooperation has been witnessed by the two countries in the past 25 years and bilateral relations are at a record high.

He also stated that his country wants to be a reliable cooperation partner of China, supporting and participating in China's Belt and Road Initiative and promoting pragmatic cooperation in infrastructure, transportation, logistics, clean oil refining, tourism, education and farm products.

Promising to offer a stable environment for Chinese investment, he said it would become a portal for Chinese businesses to enter the CEE market.

Kucinskis said that they are happy to host the China-CEE summit in view of it being an important platform for China-CEE cooperation and complementary for bilateral ties.

Both the leaders following the talks witnessed the signing of bilateral cooperation documents in trade, transportation and culture. (ANI)