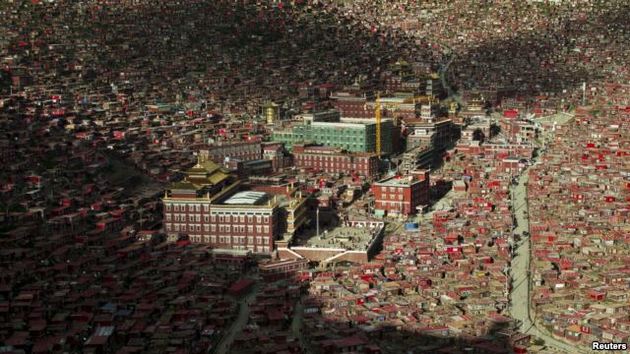 Chinese demolition crews, accompanied by police and government officials, have begun tearing down parts of what is considered the largest Buddhist study institute in the world.

The work started "with those structures that were not already recorded in the government's record of permitted dwellings," RFA's source said. "The work crews are all [Han] Chinese."

According to a previous official notice, which was circulated through Tibetan social media, over 5,000 houses were slated for destruction.

The event took place shortly after abbot Tsultrim Lodue called on the Larung Gar community to restrain itself from opposing the planned razing of the sprawling facility.

He said it might make people feel that "everything is finished" when so many houses are leveled, but that if people look back in a few years, they might find that it wasn't the worst possible outcome. He urged people against circulating information about the demolition via social media and discouraged any protests.

"Please don't mind your house, but think for the institute," he said in an undated audio recording of his speech that was circulated via WeChat. In that speech, he said protesting the central government-mandated demolition would only exacerbate the situation.

Photos of Chinese bulldozers razing the homes circulated via Tibetan social media, along with a slew of angry comments.

"If the only way to solve the overpopulation is destroying the houses, then why is the same policy not implemented in the Chinese cities and towns where the population is overcrowded -" said one netizen, a self-described Larung Gar student, according to a report by Free Tibet.

The London-based organization condemned the move, calling it part of Beijing's efforts to "subvert the influence of Buddhism in Tibet."

"They are bringing violence to a place of peace and spirituality," said Eleanor Byrne-Rosengren, the group's director. "They are making around 5,000 monks and nuns homeless. China likes to talk about religious freedom, but their actions at Larung Gar cannot be justified. [These actions] show us how [Chinese officials] really feel about Tibetan Buddhism."

Larung Gar is home to at least 10,000 monks, nuns, lay students and elderly people, although some tourism websites put estimates closer to 40,000 people. Human Rights Watch in June reported on Beijing's plan to reduce the population to 5,000 by September 2017. Wednesday's demolition indicated the timeline has been accelerated. Chinese President Xi Jinping has even taken a personal interest in the reduction campaign, sources told RFA in earlier reports.

Since 2008, the number of monks in monasteries across the Tibetan Autonomous Region was drastically reduced, leaving most monasteries with only a handful of monks and Chinese Communist Party members in charge of the facilities. Many monks in the region subsequently decamped to Larung Gar in order to continue their studies. In 2014, however, TAR-based Chinese officials ordered families in Driru County to bring monks back from Larung Gar and other monasteries in Ganze prefecture.

Larung Gar was established in 1980 by Khenpo Jigme Phuntsok, a highly regarded Tibetan Buddhist master. It houses both Tibetan and Chinese Buddhist students and practitioners.

This report was produced in collaboration with VOA's Tibetan and Mandarin services. Portions of this report are from RFA.