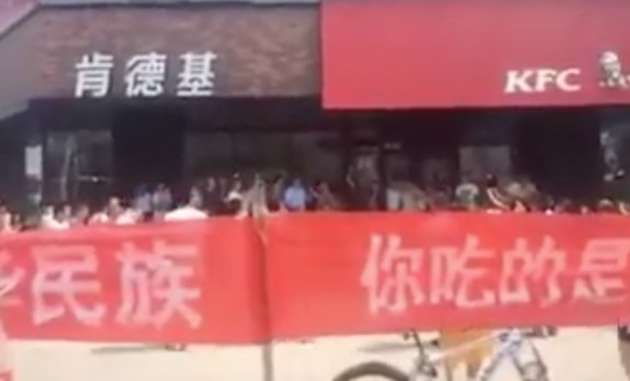 BEIJING, China - Chinese state media has criticised street protests by young people in the country who are expressing their anger over the international tribunals ruling which cancelled Chinas claims in the South China Sea.

According to reports, protesters gathered at KFC restaurants in several cities in China and called to boycott the chain.

Protesters with banners that said Get out of China, KFC and McDonalds andWhat you eat is American KFC; what is lost is the face of our ancestors gathered in front of KFC locations over the weekend and on Monday, harassing customers and telling them to not give money to the American franchise.

Chinese social media was flooded with images and videos of people protesting.

The protesters called for boycotts of American, Japanese, South Korean, and Filipino products in response to the ruling.

Chinese citizens have also started posting videos of themselves smashing the Apple iPhones.

The Chinese government has also banned all new Apple products in the country alleging that the company had plagiarised certain designs from Chinese companies.

Media houses have however, criticised these moves.

The official China Daily said that such actions interfere with a legitimate business and also accused people who visited the restaurant as unpatriotic.

The Peoples Daily newspaper, in its editorial, said that such protests do a disservice to the spirit of devotion to the nation.

Meanwhile, Philippines has rejected Chinas proposal to hold bilateral talks over the South China Sea dispute because of Chinas pre-condition of not discussing the ruling of the arbitration court.

Philippines Foreign Affairs Secretary Perfecto Yasay Jr. said, They had asked us also to open ourselves for bilateral negotiations, but outside of and in disregard of the arbitration ruling.

Yasay met China's foreign minister Wang Yi on the sidelines of the Asia-Europe Meeting, in Mongolia.

Yasay said, I told him that this is something that was not consistent with our constitution and our national interest.

According to reports, he said that Chinese officials have said that if Philippines decides to go with the ruling, both countries could be headed for trouble.

He said, They said that if you will insist on the ruling and discussing it along those lines, then we might be headed for a confrontation.

China, however, has said that there had been an informal talk between the two countries.

Its Ministry of Foreign Affairs said, Wang stated that if the new Philippines government was willing to resume dialogue and consultation with China, manage and control disparities and improve relations, China would like to meet it half way.