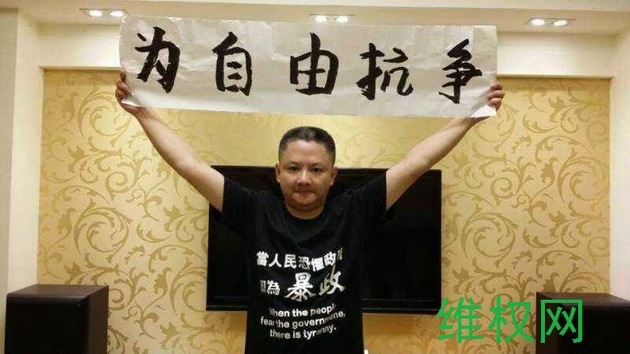 A court in the southern Chinese province of Guangdong has handed down an 18-month jail term to an activist who showed online support for last year's pro-democracy Occupy Central movement in neighboring Hong Kong.

Ye Xiaozheng, known online by his nickname Humian Yizhou ("a boat on the lake"), stood for a retrial on Tuesday at the Huicheng District People's Court in Guangdong's Huizhou city for "picking quarrels and stirring up trouble," his lawyer told RFA.

Ye was formally arrested and charged with subversion in January after posting a photo of himself online during Hong Kong's Umbrella Movement last year, holding a banner saying "Protesting for Freedom" and wearing a T-shirt with the slogan: "When the people fear the government, then there is tyranny."

After those charges were dropped, Ye was detained again in May under charges ostensibly related to a Sept. 20, 2014 public demonstration against a waste incinerator power plant in Guangdong's Huizhou city.

Ye's wife Zhong Yongmei was one of five friends and relatives permitted to attend Tuesday's trial.

Zhong told RFA that the charges against Ye were trumped up, and that the sentence was linked to his support of Occupy Central, or Hong Kong's Umbrella movement for greater democracy last year.

"They sentenced him to 18 months in jail," she said. "The so-called evidence from the prosecution never materialized."

"That's because [my husband] is innocent. He just sent out tweets that were factual, and he was detained for supporting the Occupy Central movement."

Defense lawyer Liu Hao said the trial had unexpectedly ended with the announcement of the verdict and sentence.

"When they notified us [of the retrial], they said nothing about announcing the sentence immediately, which was clearly a bit of a surprise."

He said the prosecution had cited witness statements but had failed to produce any witnesses in court, nor had they yielded to requests to see video recordings of witnesses making their statements.

Ye was accused of having an "extremely negative social impact" by inciting people to demonstrate, and of spreading "false information" on the Internet, Liu said, adding that the new evidence wasn't very compelling, and that the verdict and sentence were unjust.

"There were a number of areas in which the witness statements differed greatly from each other, and there is a lot of doubt around the numbers who attended the demonstration on Sept. 20 [2014]," Liu said.

He said Ye had issued a statement thanking his supporters, and saying he hoped that such miscarriages of justice would gradually decrease in China.

"He said he hoped ... freedom of speech would one day get the protection it deserves."

Ye has complained of being shackled for long periods and being subjected to "harsh interrogation" at the police-run Huizhou Detention Center where he was held, rights groups have said.

A vocal activist who has previously posted online in support of democratic reforms and constitutional government and against official corruption, Ye had said he is "psychologically prepared" to do time in jail.

According to the overseas-based Chinese Human Rights Defenders (CHRD) group, which compiles and translates reports from rights groups inside China, more than 100 mainland Chinese activists were detained for supporting the Occupy Central campaign, although the majority have since been released.

Chinese officials said the Occupy Central movement, which blocked major highways in the former British colony for 79-days beginning on Sept. 28, was illegal, while official media said it was instigated by "hostile foreign forces" in Hong Kong.

The Occupy movement campaigned for Beijing to withdraw its electoral reform plan, which it says was "fake universal suffrage," and to allow publicly nominated candidates to run for chief executive in 2017.

The controversial election reform plan, which offered a one-person, one-vote in 2017 elections for chief executive, but required candidates to be vetted by Beijing, was voted down on June 18 by 28 votes to eight in Hong Kong's Legislative Council, leaving the city with its current voting arrangements still in place.